Every gig I've Ever Seen #9. The Troggs. 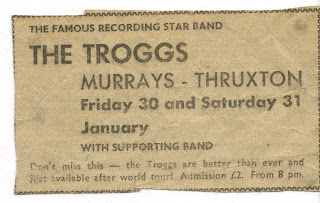 The Troggs are from Andover, my home town. I can go anywhere on the planet and hear “Wild Thing” and have my chest swell with pride. Andover’s not famous for anything else. So, The Troggs are local boys. My Mum taught Reg Presley’s daughter French at the Winton School. Reg Presley missed the premiere of “Love, Actually”. He was invited as he’d written “Love Is All Around” which was covered in the film. Wet Wet Wet did a version that spent 15 weeks at Number #1, when Number #1 still meant something. Reg turned the invite down as he was Andover’s Town Mayor and had been asked to open that year’s town carnival. Good man.

The Troggs didn’t play that much in the UK. They weren’t Rock Gods a la The Stones. Or even The Hollies. Sort of band that played Germany occasionally but had proper jobs. The venue was the bar underneath the stand at Thruxton race circuit, just outside Andover. The band looked like Dads you’d see in Andover. I didn’t know any songs other than I Can’t Control Myself and Wild Thing. Wild Thing was played for laughs. After the opening riff Reg shouted “Wait for it!” in his Hampshire burr, just before the first line. “Now!” and we all sang along. It was fun but it wasn’t punk.

If you ever get the chance listen to the “Troggs’ Tape”, a much bootlegged recording of the band arguing in the studio in the 70s. It’s like a bunch of farmers and gives an idea of where they were coming from.