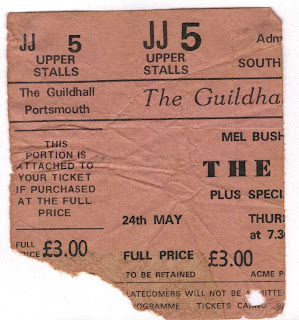 Butterflies in the stomach. We’re really going to see them, famous people and everything! Time drags at that age and the weeks beforehand certainly dragged. The day arrived. We charged straight to the front to assume the position. The Records supported who were poppy but looked suspiciously old. Years later found out it was Will Birch from Kursaal Flyers (a pubrock band) who later wrote for Mojo and other such Dad Rock mags.

Then, The Jam. The only thing they didn’t do was jump in the air, which they were famous for. They’d grown up. For a 3 piece they made an enormous sound. Rick Buckler, or “the supremely beautiful Rick Buckler” as he was once described, played big solid drums. He now drums in a Jam tribute band. Weird.

Anyway, Paul Weller was all cool and speed. Chewing gum non-stop he blasted at his Rickenbacker and spat out the words. And we knewall the words. We were so close you could see spit flying out his mouth and sweat running down his face. Bruce Foxton had bad skin, seemed a lot shorter than in the photos but still looked cool.

About half-way through our little gang led a crowd singalong of “Happy Birthday” to Weller who was 21 on the 25th. (21!?!) It spread through the whole Guildhall and I remember feeling chuffed that we started it. Weller chewed his gum until we’d finished. “Cheers. This is the Modern World!” and straight into the song. Cool. Years later I went to the filming of an invite-only gig where Weller was doing songs off his covers album, Studio 182. I saw an old geezer with a quiff and recognised him as Weller’s dad, John. Had a lovely chat with him and mentioned that gig. And he remembered it too! At the time he managed the band and introduced them at every gig. Having a crowd sing happy birthday to your son is something a parent doesn’t forget, I suppose. You could see the pride and love he had for his boy.

It was a great gig. The Jam hadn’t quite gone mega but were about to break through. They were still “ours”. Looking back you can see the ambition. Weller wrote songs. “All Mod Cons” had proved that. They played most of the singles, most of the albums and some B-sides, including their version of “Batman”! Highlight was at the end when dry ice filled the venue and the loud sound of tube trains came out of the speakers. No-one bats an eye, or ear, at taped sounds these days but back then it was unusual. “Down In The Tube Station At Midnight” rocketed by. Feedback, an extended drum solo, the end. Superb.