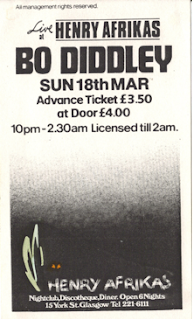 There was a minibus going to Glasgow. Me and flat-mates Craig and Andrea had gotten involved in the University Music Society. I got voted as President. Not bad out of about, ooh, 7 people. We joined so that we could arrange tickets and transport for ourselves, if truth be told. Nobody ever played Stirling as there was no point: stuck halfway between Glasgow and Edinburgh any touring bands would just play those two before going off to Aberdeen. For that reason the Student Union was pretty useless. So, the best way for us to get to gigs and back was with transport, paid for out of student funding. We’d see a gig we’d like advertised, vote on buying a dozen tickets and book the mini-van. We were supposed to help musicians with facilities but I never got involved in that.

So, Bo Diddley. Again. At the time one of my courses was Popular Music in the 20th Century. Stirling used the 2-semesters-a-year system with a Major subject and add-on units to build up a degree. I also did a term of Fine art in The Twentieth Century. All these courses were later scrapped – useless liberal Arts costing money, who needs ‘em? Thank God, the Tories were there to sort out such nonsense! Anyway, the Music course was great. One of the lecturers was Otto Krayoli, a wonderful man who’d fled Hungary in 1956 when the Russian tanks rolled in and wrote what became a standard text; ”An Introduction To Music”. Others were old Blues fans who saw Big Bill Broonzy in 1956. Occassionally, a student would give a guest talk. I gave mine on Chuck Berry. The night of the gig I had to turn in an essay the next day entitled, I kid ye not; “Can White Men Sing The Blues?”

So, we were up for some Bo. The Arches was literally that. A small vaulted basement. So small that Bo and band had to climb the same spiral staircase to get in as the audience. The band came on first and warmed the crowd up. Suddenly, Bo was on the stairs ready to go on. People were smiling, shaking his hand. Bo Diddley! Standing next to us! The music wasn’t particularly loud so I told him about my essay. “Can they?” “Sure. If they get their shit together” That was the opening quote of my essay. I wrote it overnight when I got back to Stirling. Got an A+.

Bo had a beige, 70s looking suit with wide lapels. In fact it was a beige, 70s suit and looked a bit acrylic. John Lee Hooker once said that white boys didn’t know how to play the blues, “coz they don’t know what it is to wear nylon socks!” It was a really intimate crowd and Glaswegians are great. If they like you. They liked Bo. The set wasn’t as hard-hitting as the Lyceum show I’d seen. A lot more robotics and games with the guitar. It was an act. I knew this because I’d seen it and that seemed to rob the spontaneity from it. Strange feeling. When he played it fast though, it was mesmerising. His hands like pistons, fluid movement, hammering out the timeless beat. A Legend but working hard for it.