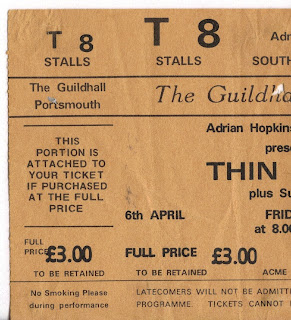 Although I was just right for Punk there was still a lot of “old” music that we liked. This included Black Sabbath, Quo, Deep Purple, bits of Genesis and Thin Lizzy. The power of the riff. Hours head-banging with tennis rackets. We made our own entertainment in those days. Thin Lizzy were really big by 1979 having shifted plenty units of a live double album, which went triple titanium or something and put them in the Big Boys league. They didn’t feel like an elder brother’s band either as the other bands had basically had their glory days. Ah, fickle public. Lizzy were also unusual in that Phil Lynott, singer and bass player, was Black and Irish. Still an unusual combination today. Or is it like Scotland? “Racism? Och no. No Blacks, no problem”.

Went with skool mate Chris “Pidge” Pigeon – see what we did there? Anyway, straight down the front. Gary Moore was in the band at this stage. After Bryan Adams, probably the worst skin in rock. Crowd were mainly greasers and rockers wearing flares and leather jackets with sleeveless denim jackets over the top, covered in badges. “Branding” is a word that everyone knows now but in the 1970s Rock bands invented the idea of the logo and all the associations of branding: recognition; community; trust; dependability; status; aspiration etc. Just a thought. Heavy metal crowds tend to be friendly as you’re all there for the same reason and, thus, Good People. It’s hard to be sniffy and aloof with such unsubtle music…

Band came on with the guitarists, Scott Gorham and Gary Moore, playing enormous kettle drums either side of the stage. This was a tune from their new studio album, “Black Rose”. The lights were amazing!! Compared to today the light show was pony, (a fact proven when I saw bits of an old Lizzy “Rock Comes to College” gig on TV in 2006). But then it was the best I’d seen. Lots of lights, burning your face off. And they went with the music! And the band’s logo, made out of hundreds of bulbs, lit up behind the drummer!! We were getting our money’s worth.  Lynott stood centre stage, light bouncing off the mirror plate of his Fender Precision bass. He did the gag from the live LP. “Anybody here with any Oirish in them? Any of da girls want some more Oirish in them?” Geddit?!

They were feckin’ great! “Jailbreak” with all the sirens, “Dancing in the Moonlight”, “Don’t Believe a Word”, “Rosalie”, “Boys Are Back in Town”!! Proper Rock.

There was a fashion at skool to make necklaces out of leather boot-laces, as worn by the Stranglers. I threw mine at Phil. Dunno why. He flinched, as you would, but picked it up and put it on. A bit later while he was slapping outstretched hands I caught his eye, pointing at my neck and then his. He understood, smiled and we slapped flesh. Righteous.