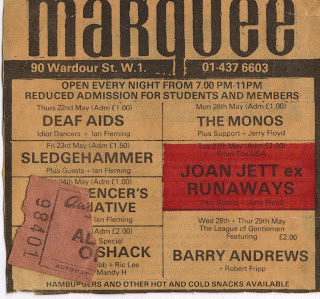 Joan was part of the Runaways who were the first big all-girl Rawk group. Joan had hit Number#1 in the post-Punk world, with “I Love Rock’n’Roll”. Big, dumb riff, almost like a Gary Glitter song. Even then I knew it wasn’t “real” but at least it was “rock” and had guitars and wasn’t like the rest of the shite in the charts. I went with my girlfiend at the time, Lucinda, who lived in London and had an elder brother who was plugged into the scene. Well, he was 19 and into music and knew a couple of minor new wave stars. Anyway, off we went to the Marquee.

Don’t really remember much about the gig apart from the “Hit”, which we all gleefully sang along to. She was dressed in leather trousers and had a tattoo on her arm. This was strange indeed. Tattoos are everywhere now and nobody bats an eye. Back then Working Class people had tattoos. It was a real sign of which side of the tracks you were on. Now, it’s all Celtic scrolls and Japanese daubs just above ladies arse-cracks. They’ll regret it.

And, er, that’s it really. All I can really remember is thinking how small Joan Jett was and that she had a skinny bottom. Not very PC but, hey, I was young.