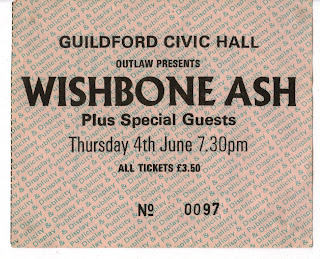 Guildford Civic Hall was part of the Seventies Rock circuit. Touring bands always played there and De Montford Hall, Leicester and Aylesbury Friars. My mum worked with Christine Brett at a local school. She was raised in London with her twin sister, Pauline, and they were teenagers in the Sixties. They saw The Who at some of their famous Tuesday night gigs at The Marquee. The band played a residency there and that’s where they made their name. One of the reasons The Marquee was “legendary”. So, Christine was just that little bit younger and groovier than my Mum.

Pauline had 2 spare tickets to see Wishbone Ash in Guildford. She gave them, gratis, to me and my mate Smelly. He used to wear a leather jacket with bits of motorbike hanging off it, which could topple a chair over due to its weight. “Urgh. You’re a Smelly!” said Selina and the name stuck. I call him Mark now. So, the four of us went to see some real time-ish Seventies Rock.

The ladies sat in the balcony. Me and Smelly got down onto the floor. A proper rocker crowd. And hippies. Patchouli oil and pot. Flares. Long centre-parted hair. The sort of people who’d go and see Hawkwind. Which is odd as Wishbone Ash are fairly soft rock, all things considered. I had one album, “Argus”, with a gate-fold sleeve adorned on the cover with a cloaked, ancient Sentry wearing a wraparound metal Viking-type helmet, holding a spear and looking out over miles of misty mountains.  Far out. 10 minute “songs” with titles like “Time Was”. There was only one song I really liked; “Blowin’ Free”. It was a rocker in The Grateful Dead’s, “Truckin’” mode. Smelly knew a bit more of their stuff.

Wishbone Ash was like a load of Seventies band in the early Eighties: is that it? Videos cost money, we’re ugly and the Man won’t pay anyway. They were already doing greatest hits tours in all but name. You didn’t hear them on the radio. No BBC6 Digital or Mojo Radio or podcasting or MySpace then. If you were lucky you’d built up a back catalogue that sold and hadn’t spunked all the money you’d made. Sure, it was a living but how long could they sustain it?

The Ash was revered in that they were one of the first British bands to have dual lead-guitarists. Two axes! Like, wow!  Andy Powell, who wore specs and played a Gibson Flying V, and the other guy. Thin Lizzy came later. Status Quo had dual rhythm guitarists. There was a little bit of Spinal Tap-ness about them, even before the film came out. Musoes. If you like long solos, just like on the record, Ash were your men. In fairness my appreciation is soiled by the sense that they were an “elder brother’s band” and anyway I liked harder, faster stuff. That said “something”. Student angst.

Not knowing their stuff, I just watched them play their instruments. Some of it was pleasant enough but a bit Prog I thought. The song l liked had a middle-eight where the guitars really took off on a flying boogie. And they fluffed it. They laughed and carried on. They were human.

Looking back I reckon that, had I been a few years older, I wouldn’t have gone for it. I’d be listening to Lou Reed, Bowie, Roxy Music. The good shit. I hope. Still, I got to see a Second Division Seventies Rock band you’ve heard of. At least they weren’t Uriah Heep