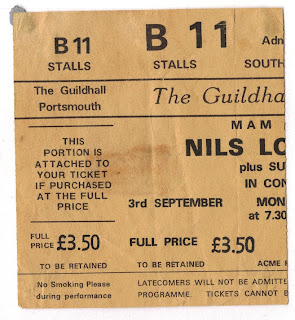 A friend’s sister had a spare ticket so I went. Knew nothing about him. We listened to his live album before we went and I liked “Cry Tough” and “Keith Don’t Go,” which was about Keef’s drug bust in Toronto. A few tunes worked but it was all AOR and I was a punk, innit. Also they put seating into the Guidhall which was, like, sitting down, maaan! Hippies. He came on in shades and scarfs tied onto his wrists. Uh-oh. Looking back there was probably a lotta coke going on. He played his guitar behind his head and with his teeth and whilst jumping up and down on a little trampoline. Huh? A session man who’s worked with Neil Young, Lou Reed, Springsteen and others, but never really made it solo. He’s diddy too. Tiny. I wonder if I’d appreciate it more now. Perish the thought.