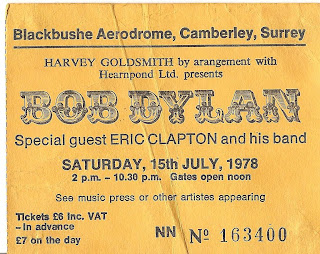 Bob Dylan. My first gig, aged 14. We had a mate who lived in nearby Fleet so we stayed at his parents’ house. Queued for hours to get in with our beer and fags - no ganja in those days! I remember going down the front for Graham Parker. Well, front and 100 yards to the right, up against the fence). "Hey Lord Don't Ask Me Questions" was great and I remember thinking "Fuck.That's loud!" Having never been to a gig or stood next to a huge PA before I was a bit scared.

Most of the day was long and boring as we couldn't see anything and the sound was constantly blown around.... it was a big, flat aerodrome. You'd think someone would have realised. Clapton got a big cheer and we recognized a few tunes like “Cocaine”. Again, couldn't see much and the sound wasn't great. I remember seeing a "Clapton is God" sign and not really getting it. Still don't...

After an enormous wait there he was! Bum Dildo!! That was the pet name we had. Ah, youth. Most of the songs I didn't know, until years later when I got into Dylan properly. Looking at the set list today it was a great Greatest Hits show! The only bit I remember with real clarity was the acoustic section when a German guy let me use his binoculars (damn, why hadn't we thought of that?!). I remember “Gates of Eden” and “It's Alright Ma” with Bob in his battered top hat. Weirdly the wind dropped so we heard these really clearly, especially the harmonica which did send a chill. For a brief moment I got a glimpse of why all these people were there and what Bob meant.

Took us hours to get back to our mate's house but the mince and mashed tatties that his Mum had waiting for us tasted magic! Years later I got a dodgy cassette bootleg and it sounded much like the day... muffled. Later that summer I stayed with an Aunt in Scotland and she had a battered old copy of “Bringing it All Back Home”. I played it non-stop.