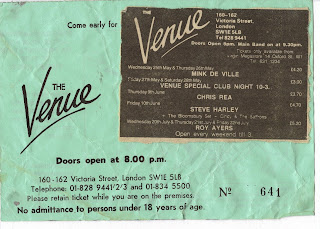 Flatmate Chris had a live Steve Harley album, “Face to Face”, which we listened to. Well, a few tracks. “Best Years of our Lives” was a good song. The album cover was Steve looking over his shoulder. Cockney Rebel had one stone-cold classic in “Make Me Smile (Come Up and See Me)”, which I remember being Number 1. “Mr Soft” had been on TOTP but wasn’t as good. Steve Harley had been a music journalist and seemed to get a lot of stick for his attitude. Interviews with him were terse affairs. Other than that I knew nothing about him.

We saw the gig advertised and went along. The Venue was an old theatre opposite Victoria Station and had opened as a rock venue. We had balcony seats and about a minute before he came on Chris said; ”You do know he’s got a crippled foot from polio?” And suddenly there he was. Steve. And he was wearing socks but no shoes and had an awkward gait. Receding hair. Songs like “Sebastian” suddenly made sense. Jerky, rhythms that he could dance to without seeming different. That’s not true, but it seemed that way. The physical presence changed the songs completely. He sang in an exaggerated Mockney too which added to the theatrical sense of oddness.

Don’t remember much of it to be honest. I recognized some from the live album but the majority weren’t “instant” songs. And not knowing them too well made them hard work. It wasn’t punk. He played “Make Me Smile” with a big crowd sing-a-long. His song, his audience. He wrote that and it’s Legend. I felt jealous. One-hit wonder? At least he had one.

The Venue closed down as a rock venue and staged Starlite Express for years.