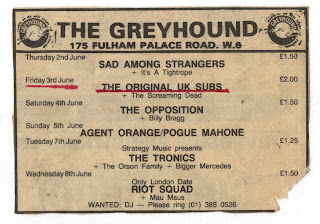 The UK Subs were part of the second wave of Punk along with bands like The Angelic Upstarts and The Exploited. The uniform was becoming set with studded leather jackets, tartan trousers, Mohican haircuts. They had a few good singles but lacked the talent, basically. This gig was billed as the “Original UK Subs” so they were already reforming then!

The Greyhound was part of the alternative music scene. Although basically a pub it was on a par with The Red Lion, Hope & Anchor, The Nashville, Dingwalls, Marquee and 100 club as a live venue. If you look through old NMEs or Melody Makers from the late 70s you’ll see all the punk bands played there.

But it was basically a pub. The crowd was mainly blokes, with a Skin Head contingent and a real sense of unease. I remember feeling a bit hick-from-the-sticks but a room full of 19 year-olds, drinking and listening to loud, shouty music is going to be a bit charged anyway.

Punk as a fashion had passed. New Romantics had taken over, Thatcher had snatched an election after The Falklands, Greenham Common was protested, the Miners were about to get fucked over and, by extension, the whole Trade Union movement, unemployment had gone past 2 million. Jubilee Hall, opposite the Houses of Parliament on the South Bank, was once home to the Greater London Council, run by “Red” Ken Livingstone. They had a huge banner facing Parliament which they updated weekly with the latest unemployment figures. It got to 4 million. Thatcher eventually scrapped the GLC and all the other City Councils nationally because they were Labour controlled. Fuck the poor, basically.

So, a lot of the audience were the disaffected youth we’d heard all these songs about. Yeah, yeah, I know, that sounds like prissy, soft, middle-class Southern pansy. But it was true. I did grow up in the affluent South. Andover’s unemployment was so low one month, (34 people out of a total of 60,000), that my step-father, Guthrie, was interviewed as a member of the business community to explain this phenomena, on Radio 4! Chris and I signed-on when we first got to London and the first visit to the Fulham dole office was scary. It was grim. The interview booths had security glass. When I see footage of slums overseas I get the same sense of hopelessness that I got in that building.

Angry. And that’s what the UK Subs were. The sound was pretty dire, the tunes a bit samey, the vocals rough. “Tomorrow’s Girls” was fun. I had that with picture sleeve AND blue vinyl, nyah. People pogo-ed and jumped around. It was fun. Kids letting off steam. It reminded me of playing British Bulldog at judo classes when I was about 10.