Every Gig I've Ever Seen #58 Iggy & The Stooges 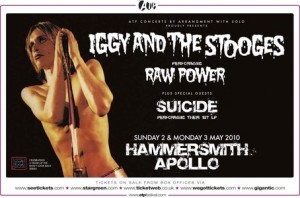 Hot on the heels of John Cale in March and Lou Reed in April, here comes Iggy and dem Stooges. Doing all of their difficult Third Album,1973’s “Raw Power”. I can feel it…

Iggy has been dragging The Stooges Mk1 around the globe for about 4 years now. Ron Ashton, the original guitarist, died last year so, quick as you like, Iggy was on the blower to James Williamson, the second guitarist. “Dude, we got gigs”. And lo, The Stooges Mk2 get to play the whole of the only album they ever made, in the city where it was recorded in those dim, distant early-70s.

Far as I know Iggy and Jim hadn’t spoken in 3 decades, but Iggy seems to be applying Swiftcover to his whole life, making belated hay now that he’s finally mainstream enough to coin in some money. Apparently, Bowie’s cover of “China Girl” made Iggy more money than all his other recorded output put together.  Me? I know the Iggy act and the insurance ads are a bit tacky but it’s also vindication for Iggy. He and his crew helped write The Book, and almost died trying.

I trundle up on the bank holiday with my oldest skool mate, Nick Edmonds. The Apollo, or Odeon as it should be called, is an Art Deco gem and lends a sense of occasion to any gig. Support on this one is Suicide, playing the whole of their debut LP.

The original album was early-electro, drenched in echo and the corpse of rockabilly. It was a sparse affair but had an atmospheric, dreamlike quality. This live experience was horrible. Two angry pensioners, in “cool” ‘70s leather: one haranguing the mic, the other bothering an old synth. It was loud, sludgy, tedium.A shame, really. One of them smoked a fag onstage. Ooh, edgy. The “dramatic” power chords at the end came on like The Phantom of The Opera. We laughed. Suicide were famously bottled off-stage supporting The Clash in 1977. Harse, as back then it was genuinely ground-breaking stuff, but, today? An interesting footnote.

Time for a pee and listen to James Brown at The Apollo over the speakers. See what they did there? We’re near the front of the circle balcony with a good view and, better yet, seats. I’m done standing at gigs. Lights dim and Jim walks on stage, picks up his Les Paul and starts Raw Power, the title track, joined by bass and original drummer Scott Asheton. Iggy grabs the mic, and we’re off.

The sound is loud and bright with Iggy high in the mix. Iggy does his usual stuff and I spent most of the evening watching the guitar. Williamson is a big guy and looks relatively straight in a T-shirt. The riffs though! He wrote them!! Fast, loud blam. The band was super tight. Search & Destroy, Your Pretty Face is Going To Hell, Penetration, Shake Appeal – with mandatory stage invasion (one of my Desert Island discs), Death Trip. All played with vim and vigour. A classic LP. Every home should have one.

The rest of the set included I Wanna Be Your Dog, I Gotta Right, LA Blues, Open Up and Bleed, Cock in My Pocket. Ur-riffs that I’d heard a million times, from them and thousands of bands since. When you consider James Taylor was the biggest thing on the planet in the early 70s, dem Stooges really did kick against the pricks. Their influence will live long.

Iggy’s 63 now but bossed the stage like a 20 year old. A true original. His voice isn’t just words. Every yelp and groan is another instrument playing. He makes the band gel. Sure, it is just a bunch of old guys playing old songs, but this didn’t feel like karaoke. It was a joy to watch. The world would be a duller place without Iggy and his Stooges.