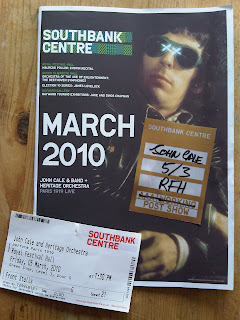 If you live long enough you’ll see most things. I’ve seen John Cale many times, including the Velvet Underground reformation in 1993. But, the whole of ‘1919”? With an orchestra? Dude, I’m there!

In Rock’s twilight years we’ve seen many classic albums played in their entirety: Pet Sounds; Funhouse; SF Sorrow. The songs still work and fans, old and new, get a once-in-a-lifetime thrill. “1919” is Cale’s most complete album – orchestral pop with a weary strain of melancholia. The songs are loosely based around the theme of life after The Great War and Treaty of Versailles. Cale gave the Velvets their avant-garde edge and has always been about more than just 3 chords.

Officially Cale’s 67, though some say he’s 72. Whichever way, he has presence. With a capital P. He makes his entrance with an ‘Hello London, nice to see you”, casual suit, shirt out, hair dyed rust-and-blonde. El Hombre cool. And we’re off, straight into ‘Child’s Christmas in Wales”.

Strings, horns, drums and guitar all blend beautifully. Cale’s rich baritone cuts through it all. I’m Fan Boy and could happily listen to him singing it all a cappella. Mind you, I get teary when I hear Welsh rugby fans singing their national anthem. There’s something about the Welsh heart…

Meanwhile, back in the jungle. “Hanky Panky Nohow” was gorgeous. “The Endless Plain of Fortune” cello-tastic with horns that made hairs stand. “Paris 1919” tailor made for the event. “Andalucia” aching. “Graham Green” jaunty. “Half Past France” made my eyes prickle. The songs, familiar to me over decades, were reborn. The ballast of the orchestra gave them a full, warm, analogue glow.  “Macbeth” romped us home. Ovation and a visibly touched Cale patted his heart.

I could have gone home happy then but, seeing as the original album was only 30 minutes long, there was more to come. The orchestra went off, leaving Cale with the band. “Amsterdam” from his first album was a complete surprise and special treat. “Femme Fatale” was radically reworked and tipped a nod to his history. “Heartbreak Hotel” was the usual demented tale of woe. “Fear” is still scary whilst making you laugh. The band are great. Axe work that flowed, every note fitting. The drummer man – a joy to watch; loose but nailing it.

The orchestra return for “Do Not Go Gentle” which builds and builds. Dylan Thomas set to orchestra with pounding piano clusters. “Hedda Gabler” is another obscure cut, which swells and unfurls beyond its original vinyl recording. It’s big. Things end with an even older curiosity; ‘Dirty Ass Rock n Roll”. Not an obvious choice but a jolly way to wind things up.

I was there. Tidy. “Music For a New Society” next, perhaps?