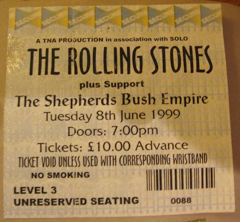 Rushed down to Tower Records, Piccadilly Circus, with Rod Webster on the Monday morning. We were supposed to be editing but we bunked off – um vee. Well, why not, it’s not like it happens everyday? Queued for an hour, handed over £10 cash money (bargain!) and got a ticket and wrist band.

The Stones always liked to do a small club date in London, famously playing the 100 club, Brixton Academy and The Astoria on different tours. Although huge all over the planet, London is still their home town and they always needed to put on a good show in front of the home crowd. 1999 saw all sorts of unique gigs as the Twentieth Century drew to a close and I think people getting in a tizzy over YK2 (remember that?!) was a red herring, a distraction from a sense of loss, End of The Millennium Psychosis Blues, literally the end of an era. Part of this naval-gazing saw Macca play the Cavern Club in Liverpool, doing old rock’n’roll numbers. It made world news.

So, whither goest the The Rolling Stones in The Twentieth Century? Can they still pull it off? Does it matter? Is Rock Dead? That kinda thing. Having seen the Stones the year before at a routine Enormodome gig (and been underwhelmed) the chance to see them in such a small venue was novel.

Gig was good, but…. it got a wee bit dull it has to be said. They didn’t do the really big set-piece songs (no Sympathy?!). Bits of it were, frankly, pub-rock. Keith, perched on a stool, did “Memory Motel” or some other coked-up nonsense from Black & Blue (a nasty soulless piece of vinyl). They did “Cherry O Baby” and it was horrible. The rest descended into Chuck Berry jamming. It wasn’t all bad but after the initial rush of “kinnel, it’s Them!” you were left with just watching a band and it didn’t seem to gel.  I don’t wish to sound ungrateful of course. It was great but it didn’t change my life. Special, if only for the chance to see them in such a small venue (about 2,000). Weirdly, I saw them again on the Saturday at Wembley Stadium and they were amazing. Go figure.